About On Native Ground

On Native Ground is a successful collaboration of artists who share a common vision in creating diverse ranges of educational entertainment highlighting and preserving respect for tribal sovereignty, history, and cultural integrity. 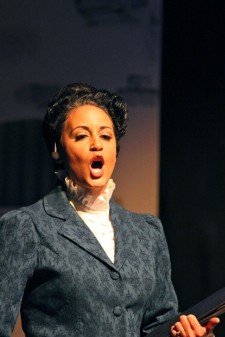 Something Inside Is Broken - A Native American Rock Opera Fall 2016 tour arrives in Escondido, CA on Oct. 14th

"Something Inside is Broken" tells the untold HER-story of the women, men, and children that survived extermination and enslavement.

How do you tell the story about the shattering of a people? With truth, honor, music, and a little comic relief.
“Something Inside is Broken” tells the story of the Nisenan tribe of Northern California during John Sutter’s reign in the Sacramento Valley. The musical recounts the events from 1846 through the California Gold Rush.
It has been described as a historical, groundbreaking, visionary event.

It is presented in the Nisenan language and in English, as well as through music - songs sung in the Ancient and almost extinct Nisenan language, rock and roll and some hip hop.  “We’re retelling the history that was left out of the school history books,” said Jack Kohler, director and playwright.

Alan Wallace, creator of the project has high hopes to bring the production way beyond community theater. The show was funded for a West Coast 3 state tour by the Rincon and Tuolumne Tribes.  “We have goals of bringing this to the Smithsonian, maybe even Broadway,” Wallace has said. “We need to be sure a residue of the Nisenan tongue remains an imprint on the American soil. This Nisenan perspective has never been heard before and seven generations later this musical is getting people excited about culture.”

California had the most tribes. It had the most population of any state in the Union.  And the most genocide – a conservative estimate given is 95 percent.  It is said that there were 175,000 Native Americans before contact.  There were estimated to be about 17,000 around the year 1900.  History and the country doesn’t want to say there was a million. Many of us feel there were way more than they say.
~ Alan Wallace

Wallace said he didn’t create the project as some big guilt trip. He is a descendant of these survivors and wants to help tell the story.  “It’s personal, but not in a sense of a grudge or vendetta,” he said. “It’s a way to say who we are. I’m just trying to do something good. The work is really good."

Get notified about new releases.

Sign up for email updates from On Native Ground.